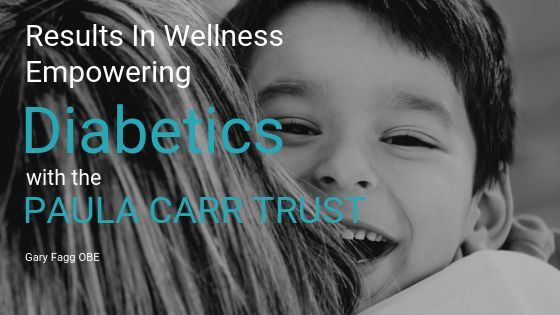 Alongside the growing number of everyday people and their families waking up to the PainPod® benefit, we’re increasingly working around the world with diverse medical experts, institutions and organisations as they switch on to PainPod power… from keeping the Army on their toes in the USA, helping aging populations activate in Australia, empowering people with pain relief in Africa to giving some of the world’s leading athletes the winning edge. This is why the PainPod was listed in  FORBES MAGAZINE health gadgets of the year in both 2018 & 2019.

Our most recent advance is in the UK, where we’re working together with the Paula Carr Diabetes Trust to help people living with Diabetes.

The Paula Carr Diabetes Trust has grown an enviable reputation for taking direct action to support people living with diabetes. Their critical work and achievements include funding the building and equipping of three major Diabetes Care Centres, pioneering provision of retinal screening and supporting the life‐saving Hypo Hounds.

The independent charitable trust is taking the lead again by looking at how the PainPod 3 and Ultra Wearable Mi devices could improve the lives of millions of people with diabetes as an alternative for medication.

This summer they’re putting PainPod devices and accessories directly into the hands of over 50 patients in a pilot scheme that will assess the benefits of the latest pain management, muscular stimulation and healing potential of the devices. They’ll also be looking at how effective they can be compared to conventional treatments involving medication or other physical therapies.

PainPod’s are already approved as medical devices to treat pain associated with surgery, trauma and musculoskeletal problems – but what’s also exciting the Trustees is the emerging evidence that the PainPod Biotechnologies could have wider positive implications to the lives of diabetics.

Not only will the drug-free treatments decrease pain symptoms caused by diabetic peripheral neuropathy, but muscular contraction and improving circulation has been shown to stimulate the production of the proteins needed for tissue repair and healthy body function. Recent research has also increased the understanding of the role of microcurrent treatment application in the successful management of diabetes and regenerative wound healing.

Diabetics are turning to this amazing pain relief solutions – no medication needed!

Gary Fagg OBE, Chairman of the Paula Carr Diabetes Trust said “ We already know from the evidence is that this type of therapy can make our lives easier by managing our own pain symptoms – but we see the potential benefits to health being so much greater – our mission is all about rolling up sleeves and taking action – if the early results meet our expectations, the Pilot could be rolled out and be making a difference in the wider diabetic population within the year”

Diabetes is the fastest growing health threat of our times and an urgent public health issue. Since 1996, the number of people living with diabetes has more than doubled and If nothing changes, it’s estimated that over five million people in the UK will have diabetes.

While Painpod devices won’t prevent diabetes, they offer people more control over their own lives and increased choice about effective alternatives to medication and drugs.

Dubinsky, R. M. and J. Miyasaki (2010). “Assessment: efficacy of transcutaneous electric nerve stimulation in the treatment of pain in neurologic disorders (an evidence-based review): report of the Therapeutics and Technology Assessment Subcommittee of the American Academy of Neurology.” Neurology 74(2): 173-176.

Carson, B. P. (2017). “The Potential Role of Contraction-Induced Myokines in the Regulation of Metabolic Function for the Prevention and Treatment of Type 2 Diabetes.” Front Endocrinol (Lausanne) 8: 97.